The NEXT Steps Youth Entrepreneur Program

The NEXT Steps Youth Entrepreneur Program (NSYEP) is an award-winning, 501c3 private operating nonprofit foundation located in Atlanta, GA. It was founded in 2008 by Dana Jewel Harris, CEO of The NEXT Steps Small Business Incubator (NSSBI) and creator of the NEW! Community On Demand™ Learning Management System.

As the official nonprofit partner of The NEXT Steps Small Business Incubator, we are tasked with implementing the Community On Demand™ LRNG Logic Model.  This means utilizing the Community On Demand™ Learning Management System with digital technologies, entertainment and entrepreneurship to create local learning ecosystems that provide effective business, curriculum, leadership and employability skills development.

Because our learning environments are designed to maximize engagement, strengthen financial literacy, create socio-economic awareness, and develop sustainable, purpose-built lives, businesses and communities, we are able to help learners:

The Community On Demand™ Digital Media Network is our media distribution company and serves as the central operation for our global marketing, sales, distribution and communication channels that promote the digital content, products, services, activities and events of the Community On Demand™ brand. The Community On Demand™ Digital Media Network integrates STEAM education, virtual currencies, cooperative marketing, e-commerce and flexible, blended-learning employment solutions throughout its operations and provides work-based learning experiences in emerging digital media, entertainment & broadcasting technologies for the JEM-TV News Channel.

As learners use Community On Demand™ assessment tools to strengthen and track the growth of their employability skills, they develop an accumulation of skills cards that represent the skills they have, use and need in order to complete each project. This accumulation of skills become known as a learner’s digital badge collection (or STEAM skillset) and can be transferred from the assessment worksheet to a learner’s digital profile, task list or project plan. Digital badge collections are great for helping learners focus on a particular skill set that employers need. They are also great at helping learners organize their thoughts, actions and resources to create and implement impact solutions, develop STEAM resumes, fill out college or job applications, create and present business pitches/presentations and so much more. Because they are digital and use blockchain ledger technology, digital badges can be shared and tracked electronically through email, social media and other social sharing technology platforms..

STEM Direct is comprised of the students, volunteers, mentors, non-profit organizations and for profit businesses that play Community On Demand™ to create impact solutions that benefit their communities.   All engagement activities of the STEM Direct Youth Chamber of Commerce are centered around financial literacy, digital technologies, entertainment and entrepreneurship.Therefore , STEM Direct's role is to create, manage and sponsor career fairs, meetups and special events that bridge the communication gaps between the education and business communities.

Help Us Build The Community On Demand™ Creative Economy

Join a group of people who care about the future and want to advance our groundbreaking advocacy, service and development to revolutionze STEAM education.

Those who know how, will always have a job.

Those who know why, will always be their boss.

Those who know what to do, determine the outcome.

Successful careers are built on solid personal and interpersonal skills. Defining, measuring, and building these skills— even naming them— can be challenging. The U.S. Department of Labor created The Employability Skills Framework which breaks down employability skills into three major categories:

The Employability Skills Framework was developed as part of the Support for States Employability Standards in Career and Technical Education (CTE) and Adult Education project, an initiative of the Office of Career, Technical, and Adult Education, U.S. Department of Education. Framework development was guided by CTE, adult education, workforce development and business organizations, and twelve federal agencies.

The Employability Skills Framework advances a unifying set of skills that cuts across the workforce development and education sectors based on an inventory of existing employability skills standards and assessments. As a result, learners, educators, trainers and businesses are able to measure nine (9) key areas of growth: 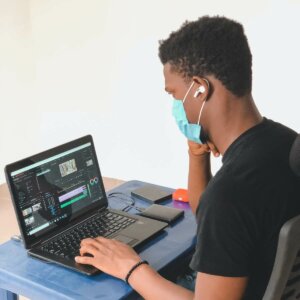 CTE addresses the needs of high-growth industries and helps close the skills gap.

CTE Works for the Economy

Another gauge we used to determine the effectiveness of our Community On Demand™ Learning Management System is CTE Course Standard #1. This standard simply states that learners should be able to demonstrate employability skills required by business and industry.

Course Standard #1 is included in all courses for Career & Technical Education nationwide. Teachers incorporate elements of this standard into their lesson plans during their courses b using differentiated instruction to match the content of each course. Elements of this standard can be addressed with specific lessons from a variety of resources like Community On Demand™ and is advised not to be treated as a unit or separate body of knowledge but rather integrated into class activities as applications of the concept.

Produced under U.S. Department of Education 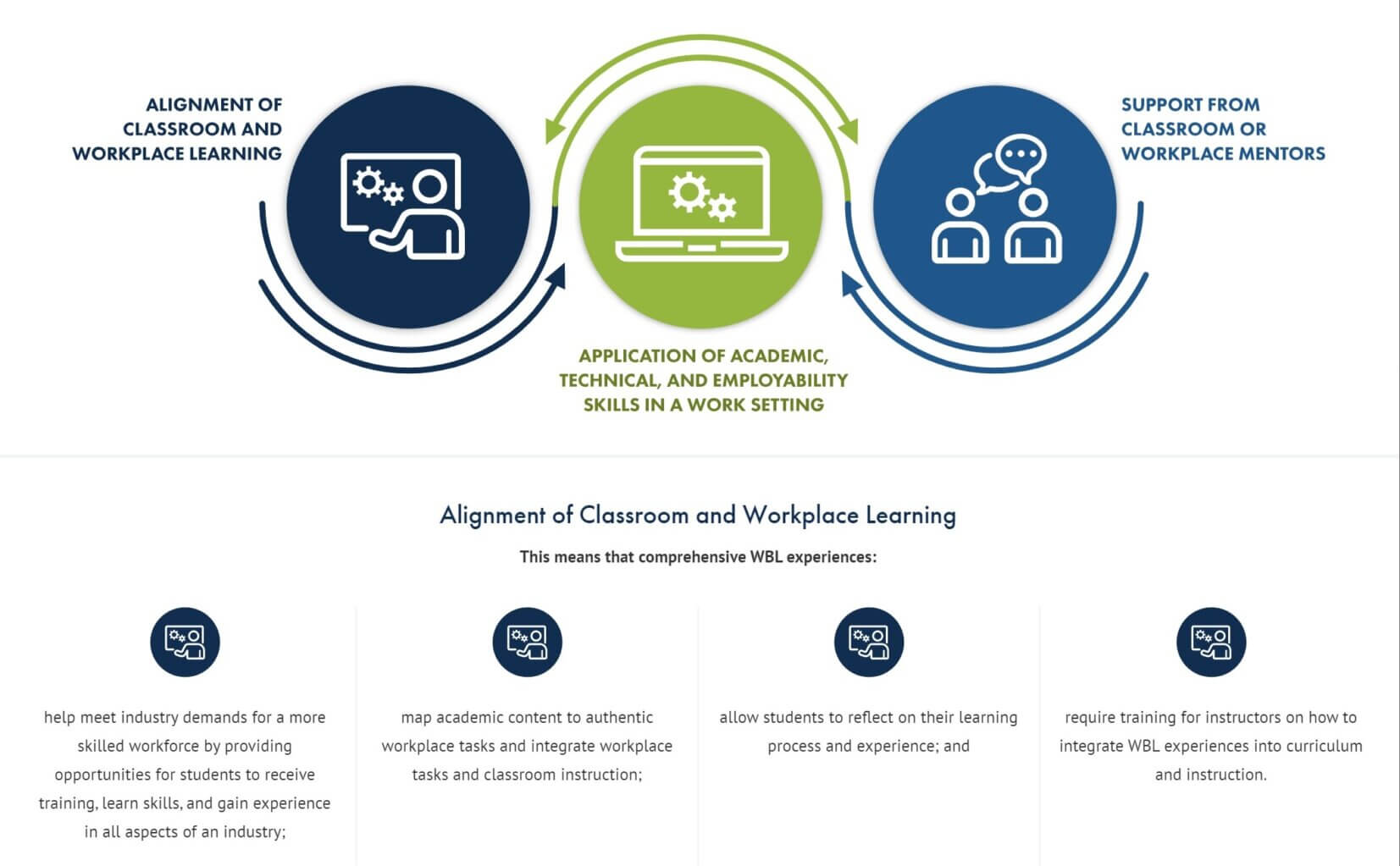 Growth Through The Real World

Work-Based Learning is a school-coordinated, coherent sequence of workplace experiences that are related to students’ career goals and/or interests, are integrated with instruction, and are performed in partnership with local businesses, industries, or other organizations in the community. Work-Based Learning enables students to apply classroom instruction in a real-world business or service-oriented work environment.

Each Work-Based Learning experience is comprised of school-coordinated workplace experiences that are related to students’ career goals and/or interests, are integrated with Community On Demand™ and CTE instruction from the Workforce Ready career Pathway.  They are performed in partnership with local businesses and organizations that become society members of The Community On Demand™ Creative Economy.

Work-Based Learning experiences created through Community On Demand™ will reinforce what the Virginia Department of Education refers to as  its 5 C’s — critical thinking, collaboration, communication, creative thinking, and citizenship — thereby allowing students to apply these skills in a real-world business or service-oriented work environment.

Listed below are the five work-based learning experiences we offer through a combined initiative called The Pop Shop.

Mentorships consist of a long-term relationship focused on supporting the growth and development of students as they learn about a particular industry and workplace. The student is paired with a community professional who has a recognized record of achievement and first-hand experience in the occupational field or career cluster of the student’s choice. The mentor becomes a source of guidance, motivation, wisdom, teaching, role modeling, and support.

Service learning experiences enable students to learn and apply academic, social, and personal skills to improve the community, continue individual growth, and develop a lifelong ethic of service. Students are able to identify an interest and a community need while developing and completing a service project addressing the community need. Students complete structured activities before, during, and after the experience and then reflect and self-assess their achievements.

Students will exercise workplace readiness skills and maintain ongoing communication with others involved with the entrepreneurship experience. Students will complete feedback and reflection assignments that celebrate involvement in the entrepreneurship experience through certificates, assemblies, and media coverage. Students who operate their own businesses will learn how to comply with all local, state, and federal regulations, including acquiring all necessary licenses and permits.

Read more about our business support services for Chamber Members

Menu
Back To Top

Please confirm you want to block this member.

You will no longer be able to:

Please note: This action will also remove this member from your connections and send a report to the site admin. Please allow a few minutes for this process to complete.

You have already reported this